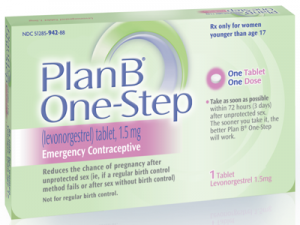 Brand Name: Plan B and Plan B One-Step

What Makes Them Different?

Emergency contraceptives are sometimes known as the “morning-after pill.” This nickname is misleading, because the pill can be taken up to five days (120 hours) after unprotected sexual intercourse, not just the next morning.

Plan B and Plan B One-Step utilize progestin (the same hormone found in birth control pills, the patch and the ring) to keep the ovaries from ovulating (releasing an egg). The progestin also thickens the woman’s cervical mucus to block sperm from reaching the egg. Lastly, it thins the lining of the uterus, making it less hospitable to implantation of a fertilized egg. Emergency contraceptives are another form of pregnancy prevention, not an abortion pill. They keep pregnancy from occurring; they cannot terminate pregnancy. This is a common misconception regarding the morning-after pill.

Emergency contraceptives must be taken after every instance of unprotected sex. Once taken, they do not prevent pregnancy occurring from future instances of sexual intercourse.

There are many reasons that you might want to use an Emergency Contraceptive:

Plan B and Plan B One-Step can be purchased over the counter in drugstores, health centers and pharmacies. You can also get them at Planned Parenthood. You must be at least 17 to purchase the morning-after pill. People under 17 must go to a health center or their private health care provider for a prescription.

Plan B comes with two pills; take the first one as soon after unprotected sex as possible, and take the second pill exactly 12 hours later. You make take both Plan B pills at once, but this may increase the negative side effects. Plan B One-Step is taken in one convenient dose. It may reduce nausea to take the pills with food.

You need to obtain emergency contraceptives as soon as possible after unprotected sex. The sooner you take them, the more effective they are at preventing pregnancy.

Plan B and Plan B One-Step can be taken up to five days (120 hours) after unprotected sex occurs. However, they are most effective when taken within three days (72 hours) when they reduce the risk of pregnancy by 89%.

The cost of emergency contraception ranges from $10 to $70.

The benefit of the emergency contraception pill is that it can be a second line of defense against getting pregnant. Sometimes first methods of birth control fail, because of misuse or a faulty product. Some people may find it difficult to postpone sex when contraception isn’t available, and the morning-after pill can help ensure that does not result in pregnancy. Emergency contraceptives are not meant for frequent use or to be used in place of regular birth control.

Approximately one in four women will have nausea or sick feelings after taking emergency contraceptives. Some women combat this with an anti-nausea medicine, which can be taken one hour before the morning-after pills. Other side effects can include