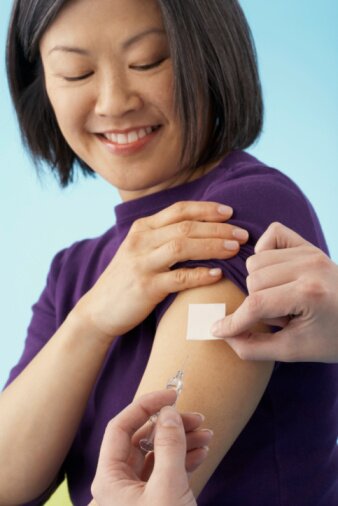 Depo-Provera is a shot with long-acting form of the hormone progestin (medroxyprogesterone acetate). Progestin prevents ovulation (the release of an egg from one of the ovaries). Depo-Provera also works to prevent pregnancy by thickening the cervical mucus, which prevents sperm from reaching and fertilizing the egg.

Oral contraceptives are only to be utilized as a form of birth control and do not protect against the transmission of HIV (AIDS) or other sexually transmitted infections (STIs).

A health care provider must administer Depo-Provera. The shot is injected in the buttock or upper arm. Although Depo-Provera is active for 14 weeks, you must get the shot every 12 weeks for it to be effective.

When Depo-Provera is the only birth control method utilized and is used exactly as directed, it is over 99% effective at preventing pregnancy.

Depo-Provera costs $35-75 per injection. Each injection is effective for three months.

The most obvious benefit of the Shot is the ease and convenience of getting it only every 12 weeks. Women who use Depo-Provera appreciate that there is no daily pill to remember.

The Shot can be an effective method of birth control when used as specified. Unlike regular birth control pills, it contains no estrogen and might not cause the typical side effects associated with the other pills, such as breast tenderness and nausea.

Many organizations consider Depo-Provera to be compatible with breastfeeding, because only small amounts of progestin pass through the breast milk. Progestin is not shown to have adverse effects on a baby’s health, weight gain or development. Talk to your healthcare provider about when is the best time to get the Shot after childbirth.

The Shot has been shown to have the following possible benefits:

Depo-Provera has been confirmed by the FDA to cause loss of bone density. Recent studies indicate that the osteoporotic (loss of bone tissue) effects may increase with continued usage of Depo-Provera and may be irreversible.

All combination estrogen and progestin contraceptives carry a risk of stroke, heart attack and blood clots, especially for women who smoke and/or are older than 35. Women who are taking oral contraceptives should not smoke.

Possible side effects include